JAANUU » From Dresses To Scrubs: The Evolution Of Nurses’ Uniforms

From full-length nurse gowns, starched white uniforms and tiny pointed caps to form-fitting scrubs in a wide array of colors, nurses’ uniforms have come a long way over the years.

The history of nurses uniforms has undergone a radical change over the past century or two. Originally stemming from a nun’s habit (as nuns were often in charge of caring for the sick), the first version of “nurses scrubs” came about in the 19th century, when common knowledge of germs and how they spread was rudimentary.

Less flattering and arguably frumpy, this style of uniform for nurses emphasized modesty. Regional variations included pinafores to accompany the look and keep the outfit clean, while a nurse’s cap kept their hair away from patients’ faces. This was a more modest uniform for nurses that also followed the fashion styles and silhouettes at the time.

It wasn’t until the mid-19th century that American nurses’ uniforms began to undergo significant changes. Head coverings became obsolete, and a more simplified, form-fitting uniform came into style, with pockets that allowed for increased functionality. Later, this streamlined, simplified and more flattering silhouette became available in different colors, too.

During the late-20th century, scrubs in multiple colors replaced traditional nursing uniforms altogether, and their popularity has only increased since.

But why did nurses stop wearing their traditional uniforms, and when exactly did nurses start wearing scrubs as a whole? What prompted such a radical shift?

Contents hide
1 Why did most nurses stop wearing the typical uniform?
2 Nurses’ uniforms versus scrubs
3 Med-athleisure fashion: an ever-evolving field

Why did most nurses stop wearing the typical uniform?

In short, this radical change in the history of nursing came about due to changing views on gender bias, comfort and hygiene.

Hygiene was the most significant factor. Early nurses’ uniforms and tunics were not hygienic, at least not to our current standards. Of course, nurses washed their uniforms, and they did their best to keep operating rooms clean. But these early uniforms were not made of fabric specifically designed for a healthcare setting, nor were they form-fitting.

This combination of poor fit and less-than-ideal fabric put the uniforms at risk for carrying contaminants. Not surprisingly, our knowledge of said contaminants at the time was not as advanced as it is today. After all, it wasn’t like you could find Jaanuu’s antimicrobial-finished fabric options in an early 20th-century field hospital.

But as technology advanced during and after World War I and World War II, the ability to make more sophisticated nurses uniforms eventually progressed, too. By the latter half of the 20th century, the shift toward more efficient nursing scrubs and pantsuits was in full swing.

Comfort was the next most significant factor for this radical shift, and unsurprisingly so. Any nurse knows the typical shift means spending hours on end on your feet, so it’s no secret that the key to staying focused while on the job is comfort. Uniforms need to be soft, flexible and temperature-friendly, but the nurses’ uniforms of the early-1900s were anything but.

Lastly, the shift from traditional nurses’ uniforms to scrubs happened in large part because of increased gender equality. Before the widespread introduction of scrubs, nurses’ uniforms usually consisted of a skirt or long dress. Unlike male nurses, which were less common than they are today, female nurses often had no choice but to wear a dress and cap, even though they were impractical in a healthcare setting. 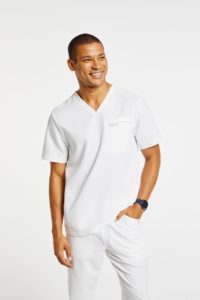 So now that traditional nurses’ uniforms are out, and scrubs are in, how can you tell the difference between the two? 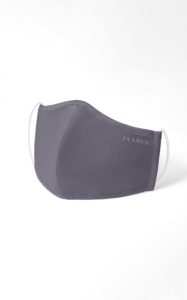 The world of med-athleisure fashion is ever-changing. Advances in new fiber manufacturing technologies have led to even better scrub options for a healthcare setting.

Fashion changes based on the cultural environment it’s created in, too. In fact, the pandemic is a perfect example of this change. With the nature of COVID-19, the use of facemasks to protect the wearer from contamination has become more widespread, mandated even. Jaanuu takes a holistic approach to keeping nurses safe. As such, we’ve joined in on this initiative to create reusable, breathable, comfortable and stylish facemasks to augment your medical uniforms.

And there you have it. The evolution of nurses’ uniforms into what we know and love today as scrubs!

Medical Scrubs: What Are They, Who Wears Them and Why?

Doctors Before Scrubs: What Did They Use to Wear?

Do You Know Why Nurses Wear Scrub Caps?

10 Tips On How To Wear Scrubs Fashionably

Our 4 Best Fabrics For Medical Scrubs

Layering Guide 101: What To Wear Under Your Scrubs

Is There a Meaning Behind Medical Scrub Colors?

10 Cakes for Nurses that Show How Much You Appreciate Them